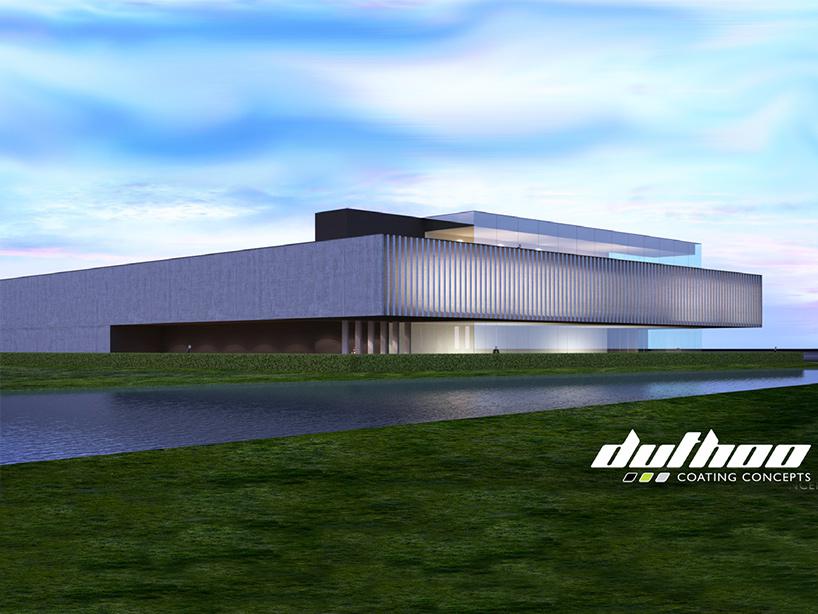 According to Bruno De Maegd, the new Duthoo production hall & adjoining offices (a design by Govaert & Vanhoutte Architects) provide another excellent example of Cobe’s approach to structural design analysis. Duthoo is a leading manufacturer of aluminum profile powder coating systems. "From a structural point of view, the industrial production facilities and the office building are entirely independent units separated by a fire compartment wall," says Bruno. “That’s why we built separate 3D analysis models for the production hall and the office building.

At ground level, the front of the Duthoo production hall is open on one side. The absence of any load-bearing concrete columns is compensated for by a steel lattice girder which is supported by a concrete column at one side and which cantilevers above a transverse concrete wall at the other side. The loads from the roof structure and the intermediate floor are introduced via the lattice girder’s upper and lower chords.

Although the final design of this lattice girder has been realized using the Diamonds 3D analysis model, initial structural designs were based on a simple 2D model. We use this approach quite frequently in many projects. We build a global 3D analysis model to maintain an overall view on the project and achieve a coherent and economical structural design, whereas we use separate 2D models to design individual building components. This approach keeps us in touch with how the structure works, which is paramount if you want to develop a sustainable structural design.

The Duthoo offices have been designed as a combination of concrete columns and a steel structure supporting the roof. The floor slab on the first floor and the foundation slab are cast on site, and have been calculated using Diamonds. These calculations not just include reinforcement quantities, but cover the analysis of cracked deformations as well. It is great that Diamonds enables us to complete concrete slab models with practical reinforcement information, such that the analysis of cracked deformations provides a realistic estimate.”

"Collaboration and interaction are central to our approach," Koen Van Nevel explains. “One of Cobe’s major assets is that we can easily be engaged as an experienced structural engineering partner within any building team. As our engineers interact closely with all project partners, they stay focused on economical and sustainable structural designs.

At Cobe, we have been using the BuildSoft structural analysis software since the very beginning. Even though its possibilities have strongly evolved over the past 20 years, this software has always remained extremely accessible to both junior and experienced project engineers. BuildSoft Diamonds truly is a software that supports structural engineers in developing creative solutions for a wide range of challenging projects."